To fill this gap, I have compiled a list of the most popular Christian and secular wedding hymns and songs that I have come across in my 10+ years of being a wedding singer. Below you can find my list--click on the title to listen! The recordings aren't all stellar, but should give you a good idea.

**Note--The list is set up with the Catholic wedding traditions in mind, however the majority of the music below could be used in any denomination** 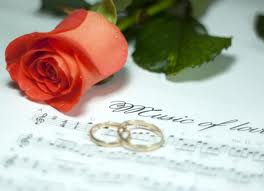 In my time as a Catholic Cantor, I have had many brides request some very interesting non-traditional pieces of music for their weddings. Now, I am usually totally fine and often excited to oblige these requests when I can. Often times, the pieces chosen have some personal significance to the bride and groom, and I love to see the way they light up when a non-traditional piece is played. However, the Catholic Church has some guidelines to follow that sometimes restricts what can and can't be played during a wedding.

Things to Consider When Choosing a Piece
The Catholic Church has 3 criteria for the music chosen for a wedding. My descriptions are below, but if you want a more "expert" opinion, check out catholicweddinghelp.com for additional help.

Does it help/inspire people to pray?If you have chosen to have a wedding in the Church, then you want to have the sacred component in your wedding and therefore should choose music that will set the tone for the ceremony or Mass.…